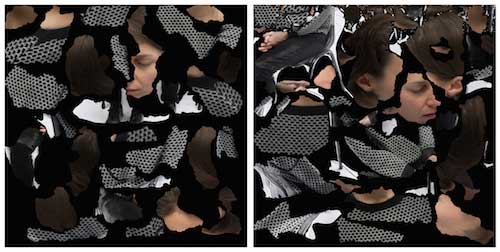 Being paid to live and study overseas is a dream – but for two emerging Australian artists that dream is about to become reality after they were awarded the annual Anne & Gordon Samstag International Visual Arts Scholarships.

South Australian sculptor and painter Zoe Kirkwood and Victorian photo-media artist Jacqueline Felstead will each use the scholarship to undertake a studio-based course at an international institution. They will have their course fees paid as well as travel expenses and a US$47,000 stipend for living expenses.

The scholarship, now in its 25th year, is arguably Australia’s most generous, says Samstag Museum of Art Curator curator Gillian Brown, with recipients given the unusual luxury to being able to afford to study anywhere they choose to.

‘It’s incredibly generous and they are permitted to go anywhere,’ she told ArtsHub. ‘There is no financial restraint on the institution that they select.

‘As long as they will really benefit from going to that institution, they are completely supported to go.’

The scholarship was established by philanthropic American couple Anne and Gordon Samstag and has so far supported 138 Australian artists to the tune of US$10 million.

‘It will mean a massive amount for my practice and the work I can do.’

Brown says the scholarships are specifically designed for emerging artists – those who have graduated in the past five years –to give them the opportunity to travel and study overseas and explore new influences.

“One of the things Gordon and Anne were struck with was the depth of talent they found in Australia and talent which they had no idea about,’ she said. ‘So they were really concerned about bridging that tyranny of distance and helping artists overcome that in widening their networks and giving them the opportunity to expose their practice to the influence of people overseas.

‘It can be incredibly difficult as an artist to live a comfortable life, even within Australia, so participating in programs overseas or reaching these networks is a little bit out of reach. A scholarship like this really gives the people the support and comfort to do it.’

She hopes to study a Masters of Fine Arts at Goldsmiths University in London to continue her focus on combining painting with sculpture by taking art off the wall and bringing it into a three-dimensional space.

‘At present my work is really interested in investigating the slippage between painting and sculpture and looking at how a painting might spill out and overrun a gallery space, becoming an ‘in-the- round’ experience,’ she said. ‘My work often references the visual overloading of the Baroque in creating theatrical installations where painting itself becomes a kind of stage-set.

‘I have never studied outside of Australia – or outside Adelaide actually. You can’t even begin to imagine what it’s going to be like and how your work will change by being exposed to new influences – that unknown quantity makes it so exciting.’

“It’s incredibly generous and they are permitted to go anywhere. There is no financial restraint on the institution that they select.”

Artist Nike Savvas, one of the three judges alongside Director of South Australian School of Art Simon Biggs and senior lecturer Mark Kimber, said Kirkwood was selected because her work was ‘articulate, challenging and inventive’.

‘Zoe Kirkwood’s practice was deemed exceptional in its complex and inventive approach to a contemporary discourse in painting,’ she said. ‘The material processes, methodologies and idiosyncratic approaches that Zoe employs in the creation of her work raises pertinent questions about the nature, role, and value of painting today.’

Kirkwood told ArtsHub she was ‘ridiculously excited’ about winning the scholarship.

‘It’s just such a phenomenal thing,’ she said. ‘Just the fact that you can go overseas and study, it gives you the freedom and opportunity to do that. It’s just unheard of – it’s a once in a lifetime opportunity to go and study where you want to with the people that you want to study and really spend that time focusing on your art without being hampered by needing to work and finance yourself.’

Photo-media artist Jacqueline Felstead told ArtsHub the scholarship has come at the perfect time for her to expand her work with digital and experimental formats, specifically video and an exploration of photogrammetry and 3D modelling.

‘It is incredible – the scholarship is amazing in every way,’ she said. ‘It will mean a massive amount for my practice and the work I can do.’

Felstead holds a Master Fine Art, Bachelor degrees (Hons) in Media Art and Social Science and is completing her PhD at Victorian College of the Arts. She hopes to use the scholarship to explore niche technologies.

‘The thing about the opportunities overseas is that I can 3D print with paper and metal and materials which make a difference to what I can then do with them,’ she said. ‘They are very specialised skills using these materials which are hard to get and the courses I am looking at applying for would be really well equipped. It would be a really great way to work through all these things in a specialised environment.’

Simon Biggs said she was a standout choice for the scholarship.

‘Jacqueline Felstead’s work particularly stood out due to its novelty of both process and outcome and the challenging nature of her approach to both how she technically creates her photographic representations and how that process unpacks the way we experience things as a function of both time and space,’ he said. ‘Felstead’s work is uncanny in the precise meaning of that term.’

To celebrate the 25th year of the Anne & Gordon Samstag International Visual Arts Scholarships, the Samstag Museum of Art is holding two exhibitions until December 9: Quicksilver: 25 Years of Samstag Scholarships and Meet the Samstags: Artists and Benefactors.

Applications or the 2018 Anne & Gordon Samstag International Visual Arts Scholarships will close June 30, 2017 and will be advertised on the Samstag website and the Facebook page.