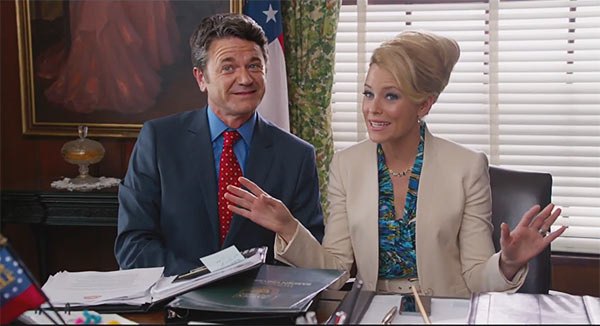 Jews, fat Americans, Asians, illegal immigrants, war-mongering Germans and women get a bollocking in musical comedy Pitch Perfect 2 — but director Elizabeth Banks says it could have been much worse.
“We edited probably 100 jokes out of the movie,” she tells mX newspaper.
“We didn’t limit ourselves in the shooting because I knew I would be able to edit the film. So while we were shooting it was an anything-goes attitude for sure.”
Banks, who stepped into the director’s chair for the sequel to 2013’s smash hit Pitch Perfect after producing that film and starring in it, is unapologetic if anyone is offended.
“I think that comedy needs to be fearless and I don’t think you should be afraid of who you are offending,” she explains.
“I think if you’re not offending someone you probably didn’t write very good jokes.”
The film certainly opens with a bang. Two years on from the first Pitch Perfect, the Barden Bellas a capella group are kicking arse as three-time national champions.
They’re so revered they’re invited to perform for US President Barack Obama and the First Lady Michelle at New York’s Lincoln Centre, but it all goes horribly wrong.

“I think if you’re not offending someone you probably didn’t write very good jokes.”

A major leotard costume malfunction for Fat Amy (played by Aussie sensation Rebel Wilson) while dangling mid-air above the troupe means she puts in a revealing performance — of her vagina.
Cue all-round horror, suspension of the group from collegiate competition and a quest to redeem themselves by winning the world championship against ferocious German team Das Sound Machine.
All in the midst of grappling with graduation and life choices for a post-university future.
Wilson did all her own stunts for the film and Banks credits her and co-star Anna Kendrick (who plays Beca) with bringing a lot of magic on set, particularly for laughs.
“We knew pretty early on that the movie was funny,” she says.
“We knew Chrissy Fit and her lines as Flo (a new “illegal” Barden Bella who lives in fear of deportation or kidnapping) were really funny from the beginning, we knew obviously Rebel and Anna were too, and it was just about all those dynamics.”
The cameos also help. Watch out for Snoop Dogg, Sons of Anarchy matriarch Katey Sagal and NFL team the Green Bay Packers.
Aussie songwriter Sia wrote the key song Flashlight with Sam Smith, and Jessie J sang the radio version.
The world of a capella was considered lame before Pitch Perfect’s street-style riff-offs made it cool, and Banks says that it’s still under- appreciated. The cast are put through a rigorous a capella boot camp to learn each song, their individual parts and dance moves before the cameras roll.
“There are literally no instruments in the movie,” Banks says.
“I think people have a really hard time believing that all the sounds in the movie are made using human voices, but they truly are. It’s an amazing skillset.”
The franchise has been described as a nod to girl power but Banks plays down the feminist angle.
“I think you could replace nearly every girl in the movie with a boy and still tell virtually the same story,” she says.
“I think the story is really about the teamwork. What I love about this movie and these characters is that there are no apologies ever. No one is talking about how they look … there is no makeover scene. These girls just exist, they are fully formed human beings going through a transitional time and having to work together as a team.”

“I have such a great partner in John Michael. We know when we’re nailing it. The whole crew is laughing.”

Banks, who also produced the film with husband Max Handelman, dismisses any notion that she had to work harder as a woman — especially for her debut.
“What I have done is rare for sure but I didn’t have any difficulty because I’m a female. Being a woman really had no bearing on how I ran the set or the respect I felt from my entire crew,” Banks says.
And the industry is loving her: She was recently named CinemaCon’s Breakthrough Filmmaker of the Year.
And how was directing herself as she reprised her role as Gail Abernathy-McKadden, the a capella commentator alongside the hilariously inappropriate John Smith (John Michael Higgins)? A breeze. As long as she helped the crew keep it together.
“I found directing myself pretty easy actually,” she says.
“I have such a great partner in John Michael. We know when we’re nailing it. The whole crew is laughing. I can feel when they need me to call ‘cut’ because they’re all going to laugh and ruin the take.”