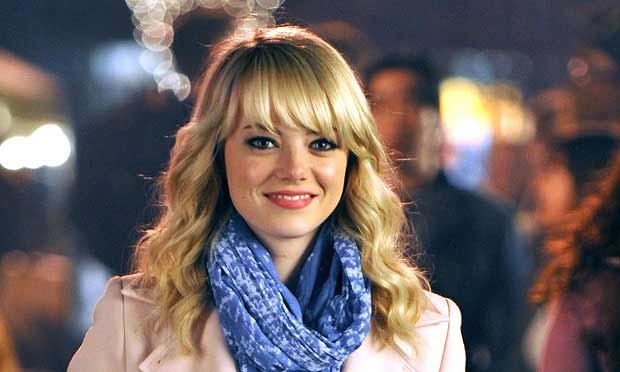 Emma Stone is one of those people that you’d love to grab a few beers with — even though you’ve never actually met her.
For me, that puts her in elite company — Tina Fey, Jennifer Lawrence, Simon Pegg, Sandra Bullock and if they’re all busy, then Cameron Diaz.
The Hollywood Foreign Press Association put her in even more elite company, nominating her for a Golden Globe for her performance as social misfit Olive Penderghast in Easy A.
That, on top of her roles in 2007’s Superbad, Zombieland, Crazy, Stupid, Love. and her acclaimed performance as Skeeter Phelan in The Help, saw audiences fall in love with her easygoing personality and well-timed wit.
Chatting on the phone about her role as Gwen Stacy in her latest film, The Amazing Spider-Man 2: Rise of Electro, the 25-year-old is funny — really funny — making jokes about everything from floating pets, her natural hair colour and why Spider-Man doesn’t eat bugs.
The last we saw Stone as Gwen, her dad, George had just died in the line of duty, but not before making her superhero boyfriend Peter, aka Spider-Man (and Stone’s real-life beau Andrew Garfield), promise to stay away from her.
“We pick back up about nine months after her dad has died so their relationship is pretty, pretty rocky still,” Stone says.
“Because it’s difficult to promise someone on their deathbed that you’ll stay away from their daughter and then just jump right back in,” she laughs.
“It’s a little insensitive, but I think that’s the whole conundrum — he’s trying to be incredibly sensitive to that and he’s pretty haunted by that whole circumstance.

“She really, really is not afraid to jump into the line of fire and get herself involved in situations because she always really wants to help.”

“(And) what’s the other option? That you’re not with the person you love because it’s a dangerous situation? That’s love, isn’t it?”
Stone says she loves that quality within Gwen, that she refuses to sit on the sidelines and is always trying to help.
“She really, really is not afraid to jump into the line of fire and get herself involved in situations because she always really wants to help,” Stone says.
“She’s a pretty brave girl. She’s used to having a hero for a father and her dad ran the police department so he was the hero of the city before Spider-Man came along. She’s used to that attention on heroes.”
As with all Marvel films, the storyline in this film is all about Spider-Man Vs the villain — and this instalment sees the introduction of a few, the main being Electro (Jamie Foxx), and Spider-Man’s nemesis Green Goblin (Dane De Haan). Electro comes to life when Oscorp worker Max Dillon is involved in an electrical accident, turning himself into a livewire, literally.
He turns on Spider-Man when the Lycra-clad hero doesn’t immediately remember meeting the less-than-ordinary Max, who had assumed they were BFFs.
Late in the film, Electro teams with Green Goblin, aka Harry Osborn, an old friend of Peter’s who has returned to run Oscorp after the death of his father.
And before you freak out — these aren’t spoilers — particularly not to those who have read Stan Lee’s comic books.
But for those who haven’t, brace yourself — this film is partly based on The Amazing Spider-Man Issue #121, titled The Night Gwen Stacy Died.

“It’s unlike anything else I’ve ever gotten to do or will get to do again.”

And while the filmmakers have said in the past that they will stay true to Lee’s original vision, Stone is tight-lipped on whether this will be her last appearance as Gwen.
She even feigns outrage when I suggest Stacy’s death might not be a bad thing — you know, in keeping with the filmmaker’s promise not to Hollywood-ise the storyline.
“You are such a jerk!” she laughs. “But I know, I know … it’s fair. I read that issue before I even auditioned for the part and that was what drew me to the character in the first place, the fact that the storyline goes that way,” she says.
“I’d never seen anything like that and I don’t think anybody else had either.
“There was a boycott on the comic books when that happened to her so it was kind of part of the reason I wanted to be a part of it in the first place. It was definitely a big draw.”
Stone says she loves working on Marvel films because of their scale — and her co-stars.
“It was a really, really fun set,” she says.
“It’s unlike anything else I’ve ever gotten to do or will get to do again. The scale of it is enormous with all these warehouses and green screens and the amount of crew members is also enormous — it’s an amazing experience to be involved.”
And surely being involved in a film such as Spider-Man must have made her think about what her choice of superpower would be … “Invisibility, without a doubt,” she says.
“That would be really, really great. You’d have to use for it good, not evil, though. You could make things float in rooms and scare people and that would be kinda fun.
“You could be like a ghost — that is of interest to me,” she laughs.