As COVID-19 carves out a ‘new normal’ for almost every aspect of our lives, more and more people are jumping on their bike for exercise and transport.

The City of Melbourne has responded to the emerging cycling boom by fast-tracking 40 kilometres of bike lanes over the next two years to connect suburbs including Carlton, East Melbourne, North Melbourne, Brunswick and West Melbourne with the CBD. 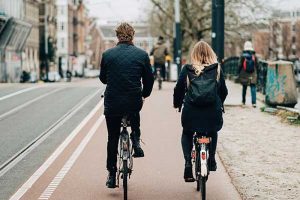 There’s much to learn by looking at what some of the great cycling cities around the world are doing to encourage more people to get on their bikes.

But while RACV’s senior planner Stuart Outhred says the bike lanes will help make cycling more accessible and safer for more people, he believes Melbourne still has a long way to go to become a truly bike-friendly city. “We’ve got pretty low rates of cycling, relative to what we potentially should have,” he says. “I think that’s in large part because the road environment isn’t safe. It’s quite intimidating.”

That’s why Stuart and RACV have put forward plans to develop a network of ‘cycling superhighways’ across the city, providing separated bike lanes and other cycling-friendly infrastructure on key routes to make it safer and easier for people to move around by pedal power. The plan has been listed as a priority by Infrastructure Australia, the government’s key advisory body on infrastructure projects.

Bicycle Network spokesman Alexander Miller hopes initiatives like the cycling superhighway network and the City of Melbourne’s pop-up bike lanes will encourage those who have jumped on a bike during the pandemic to feel more confident about riding as the COVID crisis subsides.

“We need to make sure that people still feel like they’re able to ride to work, when work returns,” he says. “So if you can swap out a five-kilometre car trip with a bike ride then that goes a long way to improve your health, and a healthier Australia.”

So what else can be done to make Melbourne more bike friendly? Stuart and Alexander agree there’s much to learn by looking at what some of the great cycling cities around the world are doing to encourage more people to get on their bikes.

What other cities are doing

Melbourne is now starting to implement what London transport planners did 10 years ago – that is, identifying key routes to the city from the outer suburbs then creating dedicated cycling corridors with separated bike lanes, one batch at a time.

Stuart says separated bike paths are the key to bike-safe roads, and have been proven to decrease fatalities, as well as significantly encourage people to use their bikes. “Imagine the space on a road where you’ve got that physical protection, it’s a really generous width, and it’s direct – it doesn’t meander through suburbs, but actually takes you where you need to go.”

Melbourne’s CBD has some separated lanes, but not enough, says Stuart. Ditto on routes into the city. But the good news is councils are working on creating them and the first of the City of Melbourne’s bike-lane barriers have been installed on Drummond, Faraday and Albert streets.

Now the Brits have upped the ante again with an ambitious two-billion-pound plan to transform British cycling culture, which includes creating thousands of miles of kerb-protected cycleways, a bike-friendly overhaul of the road rules, and even making bikes available via prescription from the National Health Service. Stuart says Melbourne could learn a lot from the British plan, which puts health (as opposed to traffic congestion) at the centre of the push to promote cycling.

The City of Melbourne’s decision to use plastics, rubber and recycled materials as part of a faster method of bike-lane construction borrows from San Francisco’s Quick-Build program. In a bid to reduce the number of road fatalities in the US city, bike lanes were built quickly using flexible materials – a departure from the old approach which required years of planning, design and permanent construction.

“In the current climate with COVID-19, a lot of cities are following that lead and doing things like temporary bike lanes or pop-up infrastructure, that can be done quickly,” says Stuart. “It’s a fantastic model – it’s not going to cost much, and if it doesn’t work, it can be altered.”

The City of Melbourne’s first bike-lane barriers are made from recycled glass – a big tick for the environment, too. 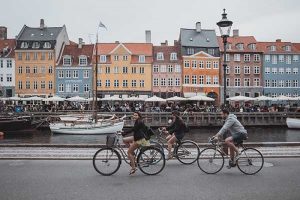 European cities including Amsterdam and Copenhagen often top travel lists for cool cycling hotspots, but these cities were once clogged with cars. A shift in transport policy in the 1970s and ’80s saw many roads entirely blocked off to cars, spawning the vibrant cycling culture we now associate with those cities.

“Those cities now have loads of bike lanes and streets that have been cut off to cars, so you can take the bike virtually anywhere,” says Alexander Miller. “You will see people of all different ages riding a bike and wearing different clothes, and you think, ‘Oh, I don’t have to wear Lycra when I ride my bike, I can do it whatever way works for me’. Quite simply, the more cyclists you see, the more encouraging it is for those who may be hesitant to ride.”

The Japanese capital may be intensely crowded, but it has a robust cycling culture, buoyed by  40kmh speed limits on inner-city roads, ample public bike storage at train stations and automated underground parking stations for bikes.

“If you look at Flinders Street Station, all the fences up in the street are packed with bikes because there are no big bike cages you can use there.”