High up in the fork of one of the many towering native gum trees sits a large, grey koala.

As intrigued by the walkers as they are by him, the koala glances down to a hushed chorus of delight.

The group gets busy taking photographs as part of an innovative program to help local researchers document the island’s thriving koala population. 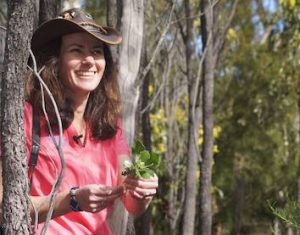 “The death toll was very high,” she says.

“Researching and supporting koalas that weren’t affected by fires is really important for the future of all the koalas in the area.”

“We invented a way of telling the koalas apart, just by looking at their noses; we’re going to be naming them, and tracking their movement,” she says.

“Everyone who comes on the tour will be involved in that.”

Just 6.4km long and 1.9km wide, Raymond Island is 300km from Melbourne, and its 770 hectares is also home to some of Victoria’s most diverse species: kangaroos, echidnas, possums, wombats, snakes, lizards and birds.

The island is the first stop on Echidna Walkabout’s four-day Wildlife Journey, a vehicle-based safari.

Janine co-founded the business in 1993 with partner Roger Smith, with a dream to show people East Gippsland’s magical wildlife, forests and coastline. There’s so much wildlife to see in Victoria, including the local echidnas.
Picture: Supplied. Source: Echidna Walkabout tours

From Raymond Island, the tour heads to the mountain forests bordering the Snowy River to explore the woodland and wilderness creek areas and document native lyrebirds, parrots, goannas, wallabies and honeyeaters.

“I’ve talked to Victorians who had never seen a goanna, or a lyrebird or a sea eagle – they thought they had to go to Kakadu or the Daintree to see those creatures,” Janine says.

“Yet they are here, in Victoria, which has more bird species than the whole of the Northern Territory.”

COAST WITH THE MOST

Day three promises more wildlife spotting of Australian fur seals, cormorants and black swans at the secluded river estuaries on the Wilderness Coast, as well as the removal of old fishing nets.

On the final day, the tour visits the coastal town of Bairnsdale, with its grey-headed flying fox population and Krowathunkooloong Keeping Place, an Aboriginal Cultural Centre.

“East Gippsland still rates as one of our best wildlife destinations, and the first we recommend.

“For mammals, it is number one, hands down,” Janine says. • Due to COVID-19, the Wildlife Journey tour has not run since March, but is open for bookings for future dates. Call (03) 9646 8249 for current information.

• The wildlife safari is fully catered and takes a maximum of eight adults.

• Accommodation is homestead-style bed and breakfast in far East Gippsland.

• There is some hiking and participants should be able to walk unassisted at least 3km on uneven dirt surfaces.