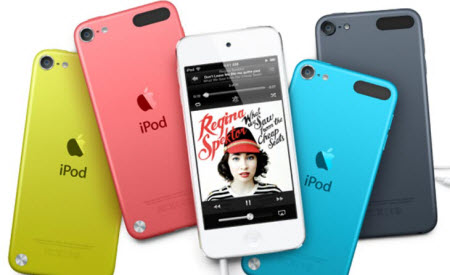 The new iPod Touch is like a better version of yourself: slimmer, lighter, more powerful and highly intelligent. It even comes with a not-so-imaginary friend.
Weighing in at just 88g and only 6mm thick — the skinniest yet — this fifth-generation iPod Touch appears to have been put on a strict diet.
At 123mm, its super-slim lightweight anodised body is a touch longer than its previous incarnation, so you’ll need deeper pockets to carry it around — and pay for it.
The 32GB model retails for $329 while the 64GB version will set you back $439. It’s more than its predecessor: the fourth-generation 16GB model cost $219 while the 32GB model retailed for $279.
Granted, you get a lot more bass for your buck. Borrowing technology from the iPhone5, the new version’s spanking 102mm retina display offers sharp, consistent viewing for photos taken on its 5 megapixel iSight camera (seven times more powerful than the last), and 1080 pixel HD video. You certainly see more in FaceTime calls.
Its dual-core A5 chip is borrowed from the iPhone4S and its speed is more than ample. It also uses the iOS 6 operating system, so you can file share via iCloud.

A new look deserves a new wardrobe, and the aluminium case looks great in pink, yellow, blue, silver and slate.

A new addition is a pop-up button at the rear to which a lanyard attaches. It’s gimmicky, and could make you nervous if you’re the type to talk with your hands.
The new voice in your head is Siri, Apple’s intuitive Girl Friday, who will answer your questions, post photos to Facebook and say ‘‘thank you’’ when you say you love her.
Siri is a boon for anyone who couldn’t afford to dump their mobile plans when the iPhone4S was released. But those who upgraded may have a meh moment when considering the new iPod touch.
If you use your iPhone as a portable music player, why buy a Touch? While some will prefer a one-stop shop, joggers will love it for its lighter weight, and gamers will dig the bigger screen and plethora of apps.
Others may prefer it as a dedicated home sound system paired with a dock. Its hefty memory will come in handy here, but its slim features are rendered somewhat useless.

Apple’s new iPod Nano has also cut the carbs, and is the thinnest yet at 5mm. But its 64mm screen is the biggest.
The Nano is a cute, no-frills device with 16GB to store enough music or podcasts to keep you entertained.
Its built-in Bluetooth means you can listen to the news on the radio while out for a walk with the dog, and you can track your exercise progress on the included Fitness app.
The Nano does offer a little flash with seven new colours — pink, yellow, blue, green, purple, silver and slate — and its $169 price tag makes it an affordable gift.
Connections for the Nano and Touch are a streamlined eight-pin Lightning Connector — no more mixing and matching with your old 30-pin cords. This is slightly annoying but understandable from a design perspective.
Both devices come with Apple’s new EarPods, the bulbous nature of which requires considerable adjustment before you find your sweet spot. But there’s no denying the sound quality is superior.