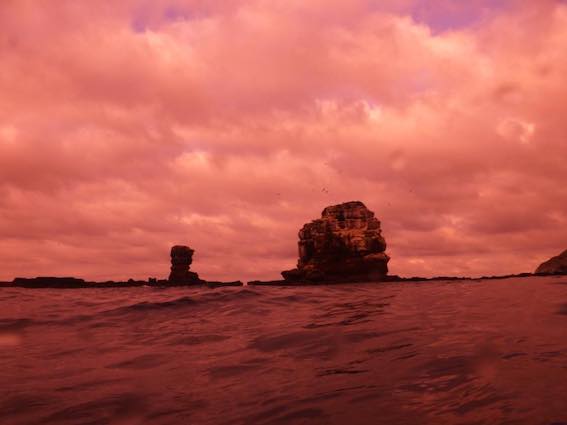 A visit to the Galapagos – one of the most ecologically wondrous places on earth – is like taking a trip to a real-life Jurassic Park.

The islands sit above a volcanic hot spot along the equator, 1423km west of mainland Ecuador in the Pacific Ocean, and have formed over millions of years. There are 19 main islands and plenty of unnamed smaller ones, and only five are inhabited.

Over millions of years, hundreds of species of plants, insects and animals that arrived here on the winds or on leaf rafts from mainland Ecuador have had to adapt to a harsh volcanic environment – and their transformation is literally the stuff of legends. Even today, scientists cite the research carried out in the Galapagos by botanist Charles Darwin back in 1835 as the foundation for modern theories of evolution and natural selection.

It really is a fascinating destination for travellers who want to witness a true microcosm of evolution.

HOW DO I GET THERE?

Flying in to the Galapagos will require a good book – it’s quite the journey.

The most direct route is a 15-hour flight from Melbourne to Santiago, Chile, then a 5.5-hour flight to Guayaquil in Ecuador, followed by a two-hour flight to one of two airports in the Galapagos – Baltra on Santa Cruz island or San Cristobal.

There are often lengthy delays, although a 16-hour layover in the riverside resort-style city of Guayaquil can be fun, too.

HOW DO I GET THERE?

At present, the 12.5-hour journey from Australia to Sri Lanka’s Bandaranaike International airport in the capital Colombo must include a stopover. But from October 29, SriLankan Airlines will begin daily, 11-hour direct flights between Melbourne and Colombo. If you still want to make a stopover, major airlines including Emirates, Qantas, Thai and Cathay also fly to Colombo.

HOW CAN I GET AROUND?

Use a combination of city tuk tuks, buses, trains and private cars. Tourist buses operate between major centres, and tickets are cheap. Express, long-haul buses are an option, but only if you’re OK with hurtling through villages at breakneck speeds.

Trains are popular, super cheap (a second-class ticket for the 150km journey from Colombo Fort to Mirissa costs about $2) and tickets can be pre-purchased for all classes. In summer, economy class can be stifling despite the open-air “airconditioning”. But views along the coastal routes and through the tea country around Ella and Kandy are spectacular. You can even sit in the doorways, dangling your legs outside the carriage.

Tuk tuks are great to see city sights (confirm the price beforehand and expect a detour to the driver’s friend’s gem factory) and privately driven cars are convenient for long distances. Hiring a car or scooter to drive yourself is discouraged – the roads can be chaotic and narrow, and are full of blind corners, potholes and stray dogs.

CAN I GET THERE BY CRUISE SHIP?

Bigger cruise companies such as Silversea and Celebrity Cruises which offer Galapagos itineraries have fly-in packages only from mainland Ecuador with transfers to their ships that remain in the islands.

Itineraries vary, but the longer you stay the more islands you’ll see.

DO I NEED A VISA?

No. You’ll get a stamp in your passport when you arrive for 30, 60 or 90 days but your passport needs at least six months’ validity. Buy a Transit Control Card for $US20 at Guayaquil and have your bags scanned by immigration and quarantine. On arrival, you’ll have to pay a $US100 national park entrance fee in cash.

HOW WILL I TRAVEL AROUND?

You can spend a few days on either Santa Cruz or San Cristobal and do day trips from there, but the best way to see these magnificent islands is by live-aboard boat.

Boats leave from Puerto Baquerizo Moreno in San Cristobal and Puerto Ayora in Santa Cruz and are a diverse mix of larger 100-person cruise ships to more private vessels of only eight passengers.

Tours generally range from four to eight days (although many people do back-to back tours to see different islands) so you can cruise the archipelago’s incredible scenery and see animals including flamingoes, penguins, magnificent frigate birds, pods of pilot whales and boobies (the red and blue-footed bird variety).

Tours that allow land visitors can be booked at short notice but specialist scuba diving boats, which don’t allow land-based activities, can fill up six months in advance. And take some seasickness pills if you’re planning a boating trip.

Website galapagosislands.com acts as a central booking agency for a huge array of boats and tours.

HOW EXPENSIVE IS IT?

South America is pretty affordable for Aussies, but the Galapagos is more expensive given its remote location.

Restaurant meals in Santa Cruz’s port town, Puerto Ayora, cost what you’d expect to pay at a mid to high-range venue at home.

Beer is about $6 a bottle but wine is expensive, even for Chilean drops, at around $50 a bottle.

There are some small supermarkets to buy water – don’t drink from the tap – and accommodation can range from a $50 a night hostel to $350 for a triple room in a half decent hotel.

The greatest expense will be boat tours and prices and conditions vary. A two-star boat with small cabins, fewer common areas and guides with less English could cost $2500 for a four-day tour. A high-end cruiser on an eight-day tour is more like $9600. An eight-day specialist scuba diving boat can cost up to $6500 for a week, and those prices don’t include an expected 5-7 per cent tip.

WHAT SHOULDN’T I MISS?

It’s not every day that you get up close to a 100-year-old giant tortoise. But in the Galapagos, it’s no biggie.

The free-entry Charles Darwin Research Station on Santa Cruz has an amazing captive breeding program where you can see baby giant tortoises aged one to 100.

Watching two giant tortoises fight – the winner is the one who can stretch their neck the highest – is like watching a magic sporting moment in slow-mo replay.

You can even visit the legendary Lonesome George, once regarded as the rarest creature in the world, who passed away in 2012 aged about 102. His species of Pinta tortoise is now extinct and, as a tribute, the centre exhibits his taxidermied body (which is a tad creepy).

CAN I VISIT VOLCANOES?

This is the best part – the entire island chain is made up of volcanoes. Some are older than others and have begun to erode and fall into the sea, while others, such as Isla Isabela, still have active eruptions.

BEST TIME OF YEAR TO GO?

Although equatorial temperatures range between 21-30C all year, Galapagos is not a tropical island destination. July to December is dry with cooler days, while the warmer months from January to June are great for sun lovers.

The water temperature changes thanks to the upswell of the Humboldt Current from the Antarctic in the dry season which is when most scuba diving travellers converge hoping to catch a glimpse of elusive whale sharks.

WHAT ARE THE LOCAL DELICACIES?

If you like fish, you’re in the right place. Unlike neighbouring Peru, there’s no guinea pig or alpaca on the menu, but there is plenty of seafood.

In Santa Cruz visit Charles Binford St where scores of restaurants open up in a nightly street food market.

A meal of grilled fish, squid and even lobster can cost as little as $40 with wine.

Without the lush rainforest foliage its mainland siblings enjoy, this clever creature has evolved into a smaller, darker reptile that survives by holding its breath to swim down and munch on seaweed.

You can find them on most islands, and even hanging around the outdoor fish market at Puerto Ayora.

Galapagos is increasingly popular with tourists, but that doesn’t mean English is common in hotels, restaurants (menus are mainly in Spanish) and among taxi drivers). Reduce the inevitable language barriers by learning a few Spanish words so you can ask for directions to the bar/hotel/loo, the cost of your Galapagos souvenir shirt, and a few beers at the bar, por favor.

WHAT’S THE GO WITH MONEY?

The official currency of Ecuador is the US dollar. There are ATM machines in the main centres on Santa Cruz and San Cristobal and you can pay with your VISA at most restaurants and hotels, but it is advisable to bring cash with you.

Two words for you: David. Attenborough. His docos on this island chain are fabulous. Documentary The Galapagos Affair: Satan Came to Eden is also highly recommended.

Original article appeared in the Escape section of the Herald Sun