It would be a great understatement to suggest that 2020 has been disruptive. As the pandemic upends every aspect of our lives, regular routines have been thrown out the door but we have not followed as travel restrictions left motorhomes and caravans languishing in the driveway. Bad news follows at every turn and the ‘noise’ of the past several months has been fairly intense.

Arguably, what Australians need now is a way to turn the volume down on the chaos, a place to recoup and rejuvenate.

As bucket lists across the country are being re-shaped now that international travel is off the cards for some time, there’s no doubt Australia offers plenty of attractions to fill them up. And the enigmatic Kimberley Coast is a top contender.

The area is huge, bigger than the entire state of Victoria. While many explore the Kimberley by car to the Dampier Peninsula and inland toward Kununurra via the Great Northern Highway and the Gibb River Road, seeing the spectacular coastline by boat offers a unique travel experience.

“It is probably the last real wilderness area left in Australia,” says Lennie Laughton, captain of the Discovery One vessel that operates a number of water-based tours to the coast during the dry season from March to October.

“Crikey, it is one of those things that everyone should have on their bucket list. It is just so huge and every area you go to is different.” Arguably, what Australians need now is a way to turn the volume down on the chaos, a place to recoup and rejuvenate.
Photo: Discovery One

Touring the coast by boat is an extraordinary chance to revel in the Kimberley’s isolation. Discovery One offers 13 different cruises which include return journeys from Derby (some with transport ex-Broome), as well as trips that leave from Wyndham after a short flight from Darwin. As a catamaran, it is a shallow vessel which means it can hug the coastline, and navigate slender rivers and waterways that bigger boats would struggle with.

The boat carries a maximum of 22 passengers for a relatively intimate voyage over 11 to 15 nights depending on the cruise. But, while each offers up a daily schedule, this is more of a broad brush stroke plan than one set in stone.

Captain Lennie, who has been at the helm for 12 years after joining initially as a commander of the accompanying zodiac inflatables and later a member of the engineering team, prefers to wing it. And that’s a very good thing for passengers.

Lennie is one of the most experienced operators in the region and knows all the secret spots to take his passengers, from pristine beaches and infinity rock pools atop towering cliffs to historic Indigenous art sites.

“I have never been big on itineraries, I just choose the places that I think are ideal for the people we have onboard and the conditions and the tides we have,” he says. “It’s basically the tides and the weather, you’ve always got to have options up your sleeve.”

“Crikey, it is one of those things that everyone should have on their bucket list. It is just so huge and every area you go to is different.”

One of the highlights of each tour is a visit to the Horizontal Falls at Talbot Reef. Here, huge tides force large volumes of water to squeeze through two narrow chasms in spectacular fashion, creating a waterfall effect thanks to the 10m height differential between the water of the inland bays and the Indian Ocean.

It’s a natural marvel that impressed the world’s most marvellous naturalist, Sir David Attenborough, when he visited the Falls by seaplane with Discovery One co-founder Grant Moffitt.

“It’s this twice daily event that makes Talbot Bay Australia’s most unusual natural wonder,” says Sir David in his 2002 BBC documentary Great Natural Wonders of the World. “The surest way in is by seaplane. Boats rarely venture here and there are no roads. Few people have ever seen this spectacle.”

That last part is certainly changing as more travellers opt to see the Kimberley coast by boat. There’s a thrill ride component of this portion of the trip here too, which goes down a treat with passengers — a jetboat experience up close to the thunderous, swirling rush of water.

Interestingly, Lennie says people are certainly excited by the Falls, but their expectations are blown away by other experiences, too.

“A lot of people say that is the main thing they want to see, and when they go away that’s not so much talked about because they have seen the beauty of all the other areas,” he says.

“Montgomery Reef is absolutely spectacular, the Berkeley River up the top end of the Prince region, the Hunter region — every area you go to, you are not seeing the same landscape day in, day out. It’s always different.” 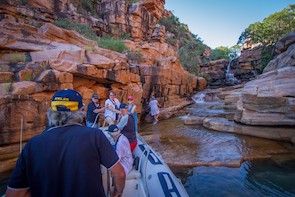 Lennie is one of the most experienced operators in the region and knows all the secret spots to take his passengers, from pristine beaches and infinity rock pools atop towering cliffs to historic Indigenous art sites.
Photo: Discovery One

While the mother ship can access many areas, a daily ritual are exploratory trips on Zodiac inflatable boats. Sometimes these are what Lennie calls “scenics”, a boat tour to simply admire the scenery of imposing red ochre cliffs that border Berkeley River or to get your hair wet at the rightfully-royal King George Falls.

But other trips snake up estuaries and cruise down magnificent gorges for land-based exploring to visit Indigenous art sites, explore cave systems and hike up hillsides to soak in natural rock pools while revelling in million-dollar views.

Born and bred in Western Australia’s Pilbara region, Lennie has been visiting the Kimberley for many years and long since fell in love with it. He reckons he is not alone, with many guests returning for second trips. He says the region can look very different according to the season — and he says it’s simply too hard to pick a personal highlight.

“Really every day is a highlight and all the different times of the seasons,” he says. “You get a period when all the Kimberley roses are out in flower and earlier in the season the waterfalls are really flowing, all as long as it’s a good wet. The Aboriginal art sites are always spectacular too.” Touring the coast by boat is an extraordinary chance to revel in the Kimberley’s isolation.
Photo: Discovery One

Wildlife is rich and abundant along the Kimberley coastline even though not all of it is friendly. Crocodiles are a common sight in the waterways, especially if the water is cool and the big reptiles need to warm themselves up on the shoreline.

The presence of those big snappers makes the choice of swimming locales something best left to the experts, says caravanner David Rigby, who did a tour with Discovery One with his wife Lyn and a cahoot of other caravanners in his club.

“You go out on the Zodiacs during the day, and I think it was Silica Beach — which is one of the most incredible beaches you have ever seen — they park the boats apart and have a spotter on each boat,” he says. “You are not allowed to splash or make too much noise because it attracts sharks or crocs but you can actually go and have a dip there. They are pretty vigilant on stuff like that.”

“I think there was the one at Camp Creek and you park the boats and walk up and you see a pool further down and you say ‘oh good’ but they say ‘no, there’s crocs in that one’ but once you scale the rocks to get up higher, there’s a nice little waterhole.”

Visitors also spot tawny sharks in Talbot Bay that like to hang around the boat, sea monitors and wallabies can also be spotted, and the Kimberley has become renowned as a refuge for humpback whales.

Birdlife is prolific as well, including sea birds such as brahminy kites, ospreys and pot bellied sea eagles. 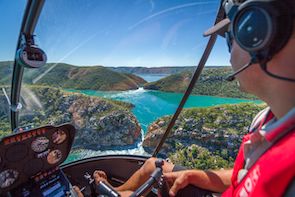 Helicopter tours of the Kimberly coast are the best way to get a bird’s eye view of the gorgeous surroundings.
Photo: Discovery One

David and Lyn boarded a cruise as part of a group holiday with members of the Trakmaster Off-Road Caravan Owner Club. They towed their 3.9m (13ft) Trakmaster Gibson offroad van from Melbourne to Alice Springs, before hitting the Gary Junction Road and finishing up at Derby to depart for the cruise. They parked their van in a caravan park here, fees for which are included in the cost of the cruise.

Like many RV travellers, they factored in a tour of the Kimberley Coast during their trip planning. Lennie says a high percentage of customers are RV travellers and take advantage of the opportunity to unhitch and unwind aboard a boat cruise.

“It’s a smart way of doing things,” he says. “If they are going to be here anyway and it is something that is on their list to see and do, then why not do it while they are going past here rather than fly back up another time. If you have the timeframe, it works well for a lot of them.”

The couple had visited this part of the country before. In 2016 as part of a four-month adventure, they travelled along the Gibb River Rd, drove up to Mitchell Plateau and camped up there, then travelled back via Derby, and stayed in a few cattle stations along the way. They then followed the coast down to Karijini National Park and then down to Perth to visit family.

But the Kimberley kept calling and the pair always wanted to venture further off the grid.

“We had seen the Kimberley and driven the roads but this was a whole new experience seeing it from the water,” says David. “We loved that aspect of it, seeing the Kimberleys from a whole different angle. Scenery-wise, it was breathtaking.”

Davis is a self-confessed amateur photographer and he admitted he found it hard to put the camera down during the trip, such was the opportunity for ‘Kodak moments’ at every turn. The boat travels only during the daytime so passengers don’t miss anything during night voyages.

But he says the evenings were pretty magic as well.

“It was incredibly quiet,” he says. “Cruising through the day it would just be the hum of the motors but once you stopped at night it was just so quiet. And then you had the billion-star views of a nighttime.”

“I am always trying to go somewhere different whenever we have the opportunity but it is such a vast area I will probably never get to it all before I give it away. But I will keep trying!”

Aside from the spectacular scenery, David said he and Lyn enjoyed the human connection of the region through its Indigenous and colonial history.

“We came across a few old settlements, Sheep Island was one of them, and just seeing how they put people on to live in these conditions was incredible,” he says.

“There were some graves in one of them and a boab tree where quite a few early people who had carved into them — early graffiti.”

With an area so vast and remote, it’s little wonder that there are still so many pockets of pristine environment on offer here. Captain Lennie is one of the most experienced operators in the Kimberley coast, yet despite all his time spent here he still hasn’t seen it all.

“Oh no, there are places I haven’t got into yet,” he says. “I am always trying to go somewhere different whenever we have the opportunity but it is such a vast area I will probably never get to it all before I give it away. But I will keep trying!”

This article originally appeared in The Wanderer Yearbook.